Stine Marie Jacobsen is a conceptual artist working to decode violence and law both individually and collectively through participatory means. She lives and works in Copenhagen and Berlin, graduated from the Royal Danish Academy of Fine Arts with an MFA in 2009 and a BFA from CalArts, the California Institute of the Arts, Los Angeles, USA in 2007.

In order to give participants a collaborative and dialogical space, Jacobsen creates open structured sociocultural and participatory projects with clearly defined themes. With a focus in themes such as film, language, gender, violence, death, taboos, anonymity, psychology, the artist conducts performative experiments and creates platforms for critical thinking and new ways of looking at ethics, identity, control, fear and trust.

Over the years Jacobsen has conceptualised and worked on a number of long term participatory and educational projects such as Direct Approach, where people retell from memory the most violent film scene they have watched and choose to play either victim, perpetrator or bystander in a reenactment or projects like Mann beißt Hund (a remake of the Belgian film ‘C’est arrivé près de chez vous’), without actors on screen. Alongside the use of film as a law system, in Law Shifters the artist organises, in collaboration with lawyers, law writing workshops for refugees, immigrants and citizens, and invites them to write their own law proposals.

In 2015, Stine was awarded an innovative educational grant from Node curatorial studies in Berlin and in 2016 she was awarded a peace Fellowship by the Rotary Foundation and won the Berlin Art Prize.

The third in her series of hybrid German grammar books and films, Danish artist Stine Marie Jacobsen continues her exploration of the German language with German for Lovers (2020).

‘Educating’ readers about love and its relation to German grammar, German for Lovers playfully introduces how amorous communication would look like if it was to strictly follow German grammar rules and encourages us to make our own rules.

The German language has always been considered more close to math, efficiency and cold capital. The author invites us to take a deeper look into how German language hierarchies and syntax effect and shape our capacity to love. With both a ‘grammar love’ and ‘love of grammar’ – the book and film shares amusing misunderstandings and sayings heard in the German dating scene and shows us how to code-switch, gender-free and pidgin our German tongue.

Does how we speak affect our emotional behavior? Are there words for emotions in German which do not have an equivalent in other languages, that are untranslatable? How do we love in German? With what consequences?

The project, book and film, premiered at Kunsthal 6100 in October 2020 and is supported by the Danish Arts foundation. 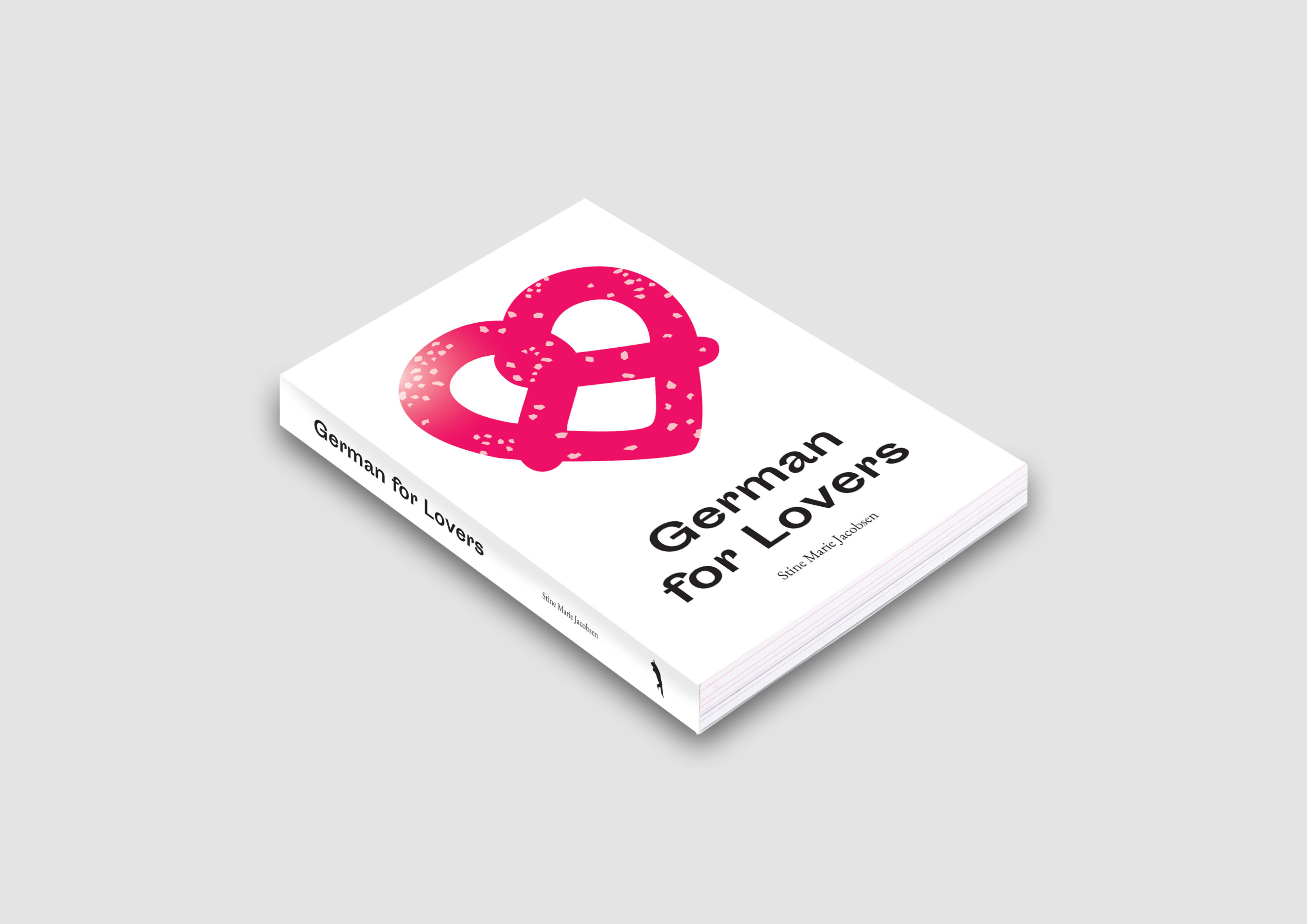 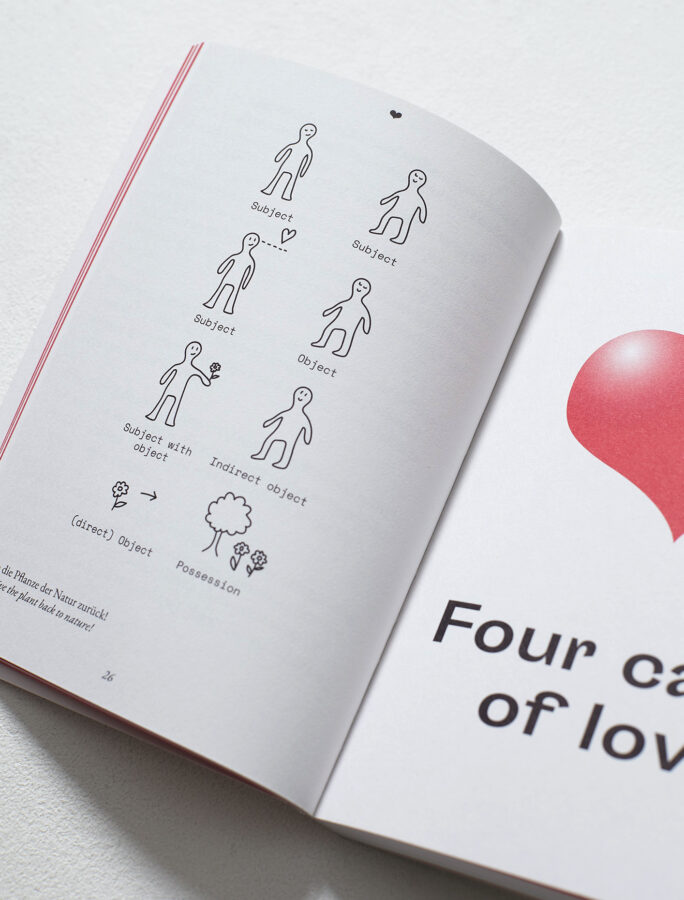 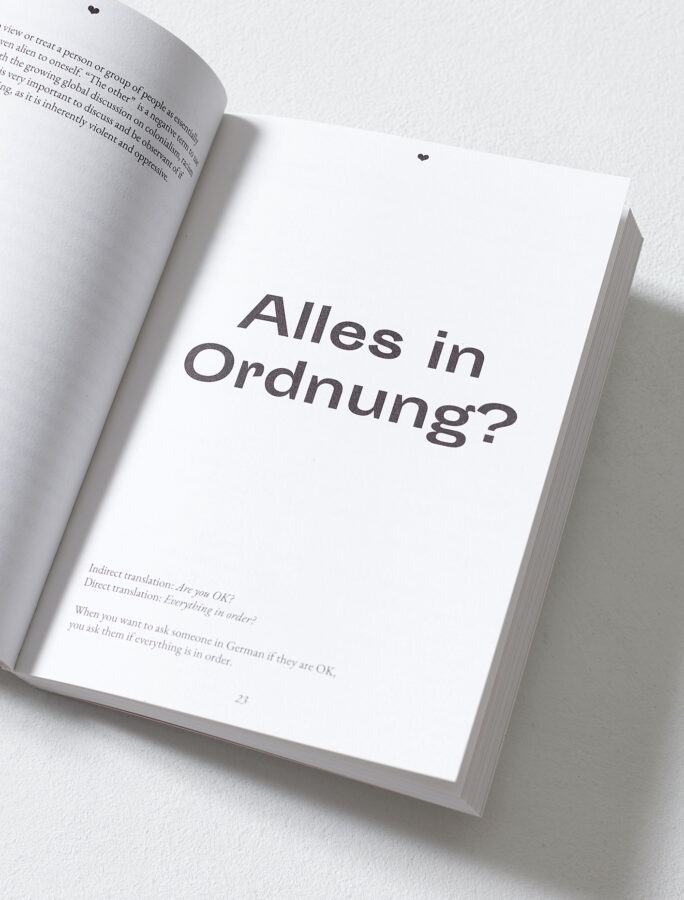 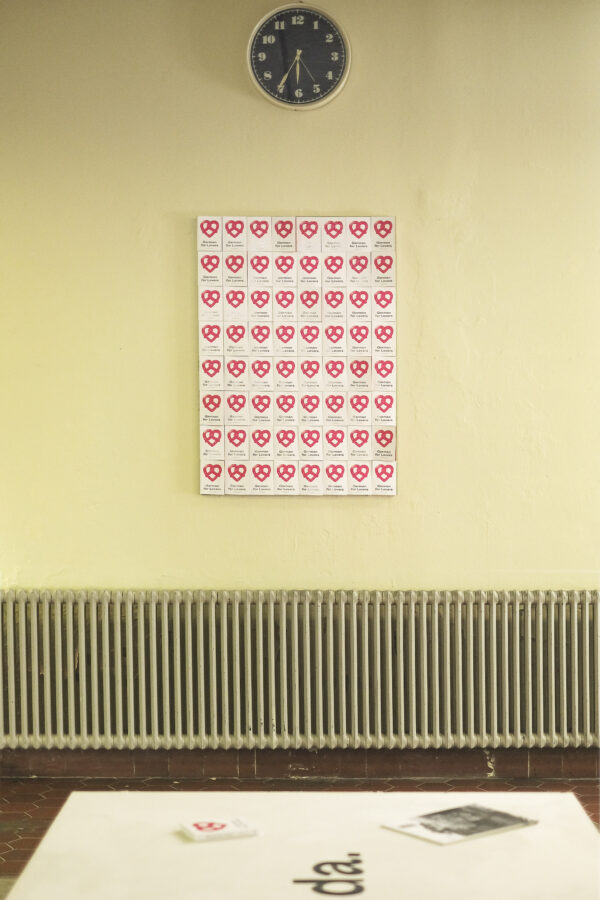 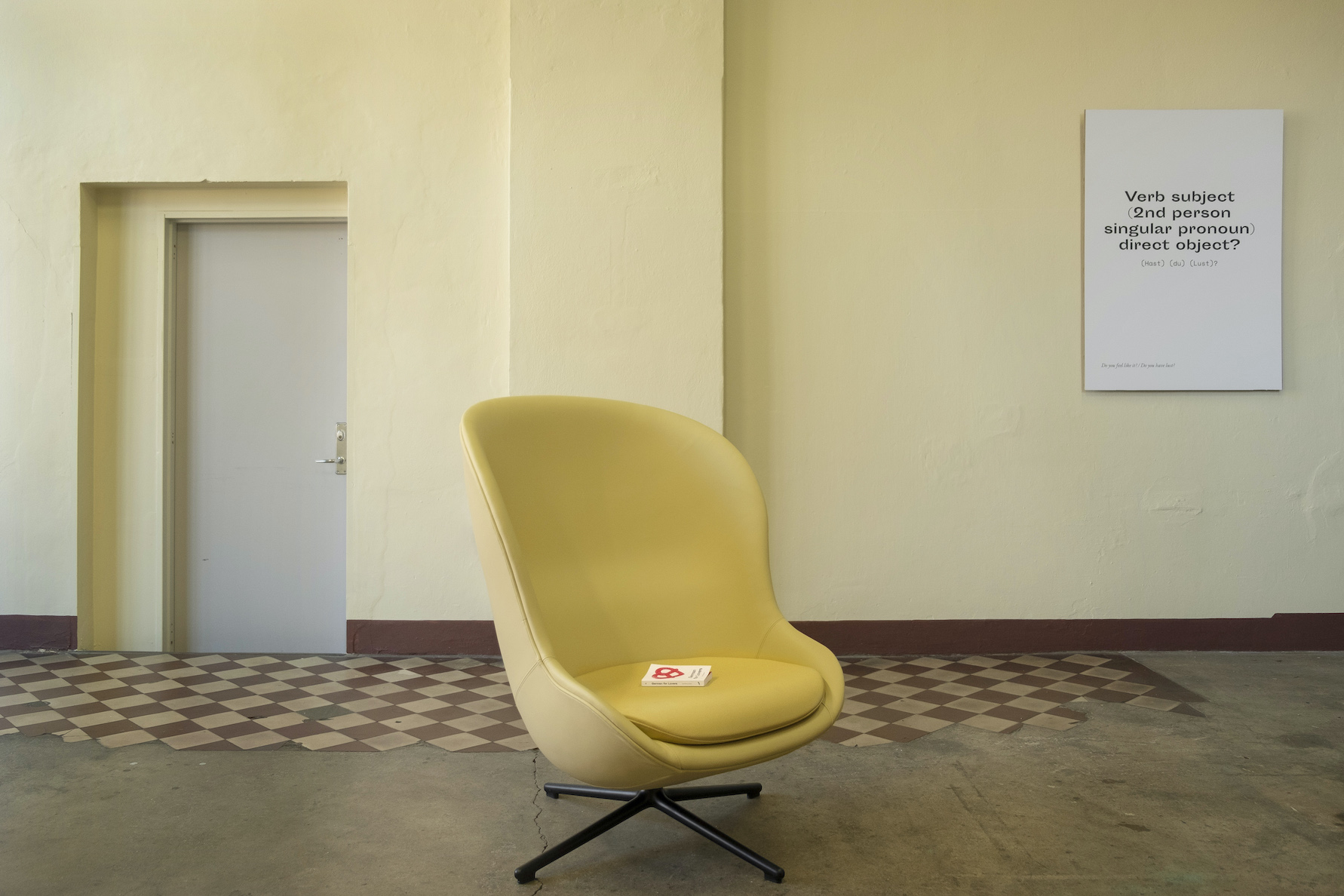 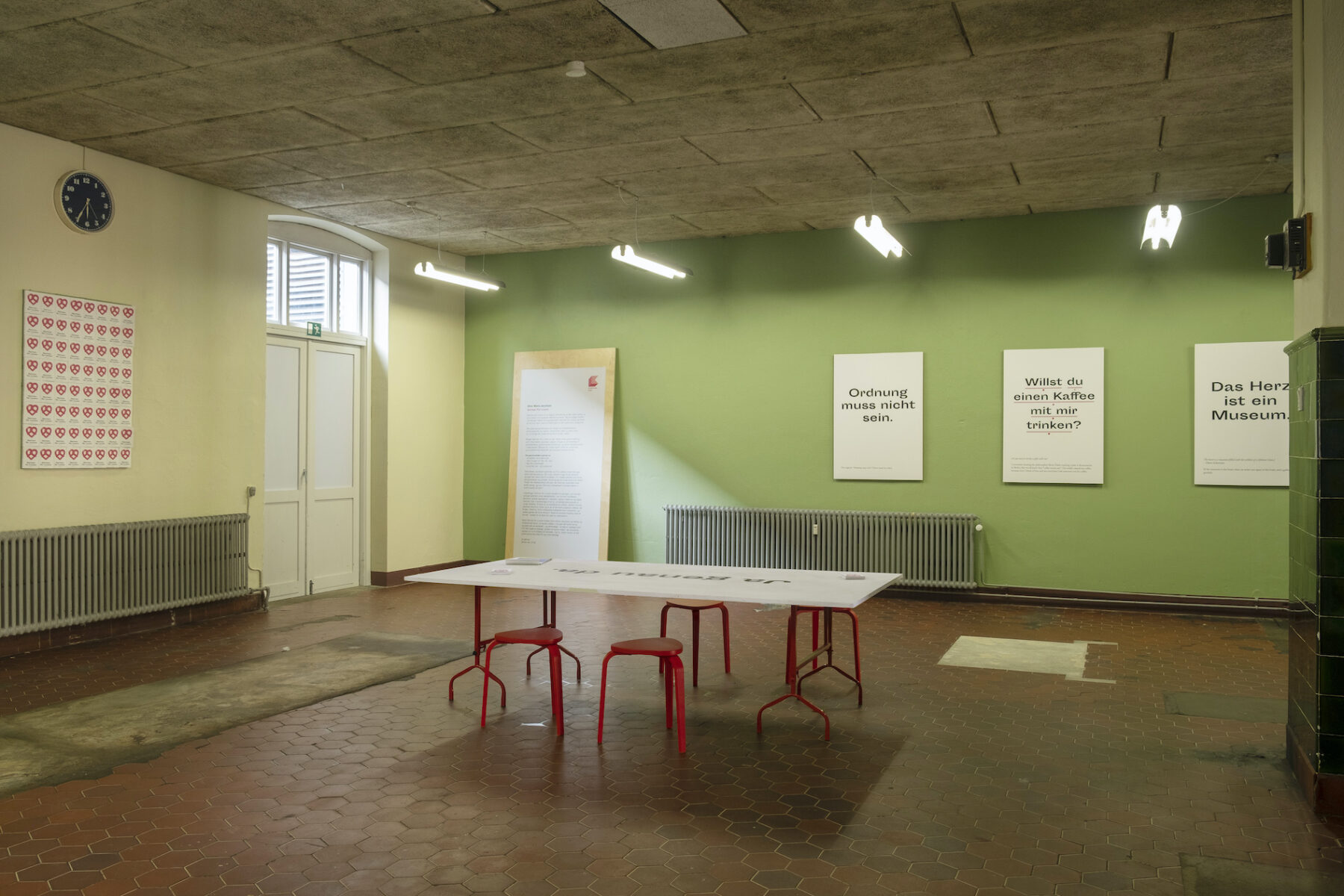 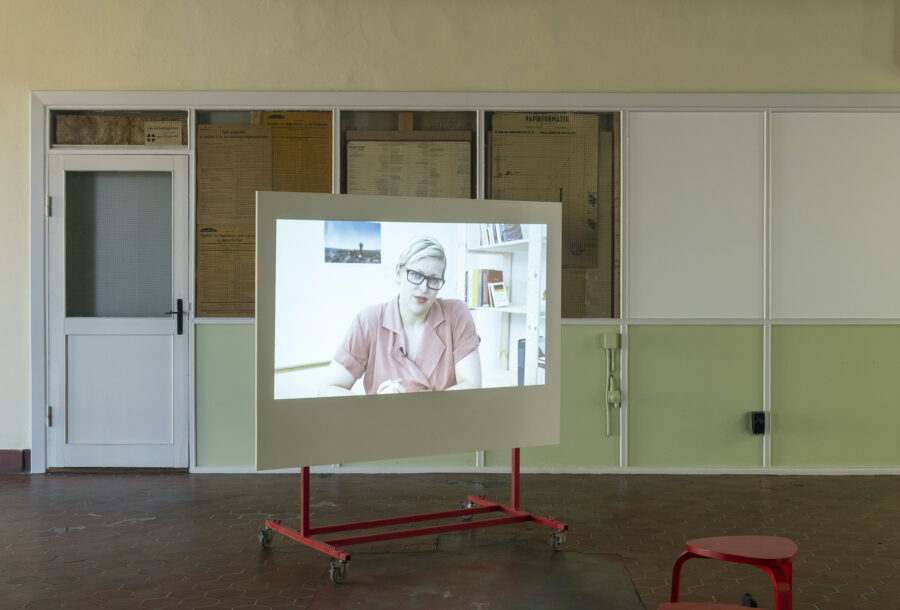 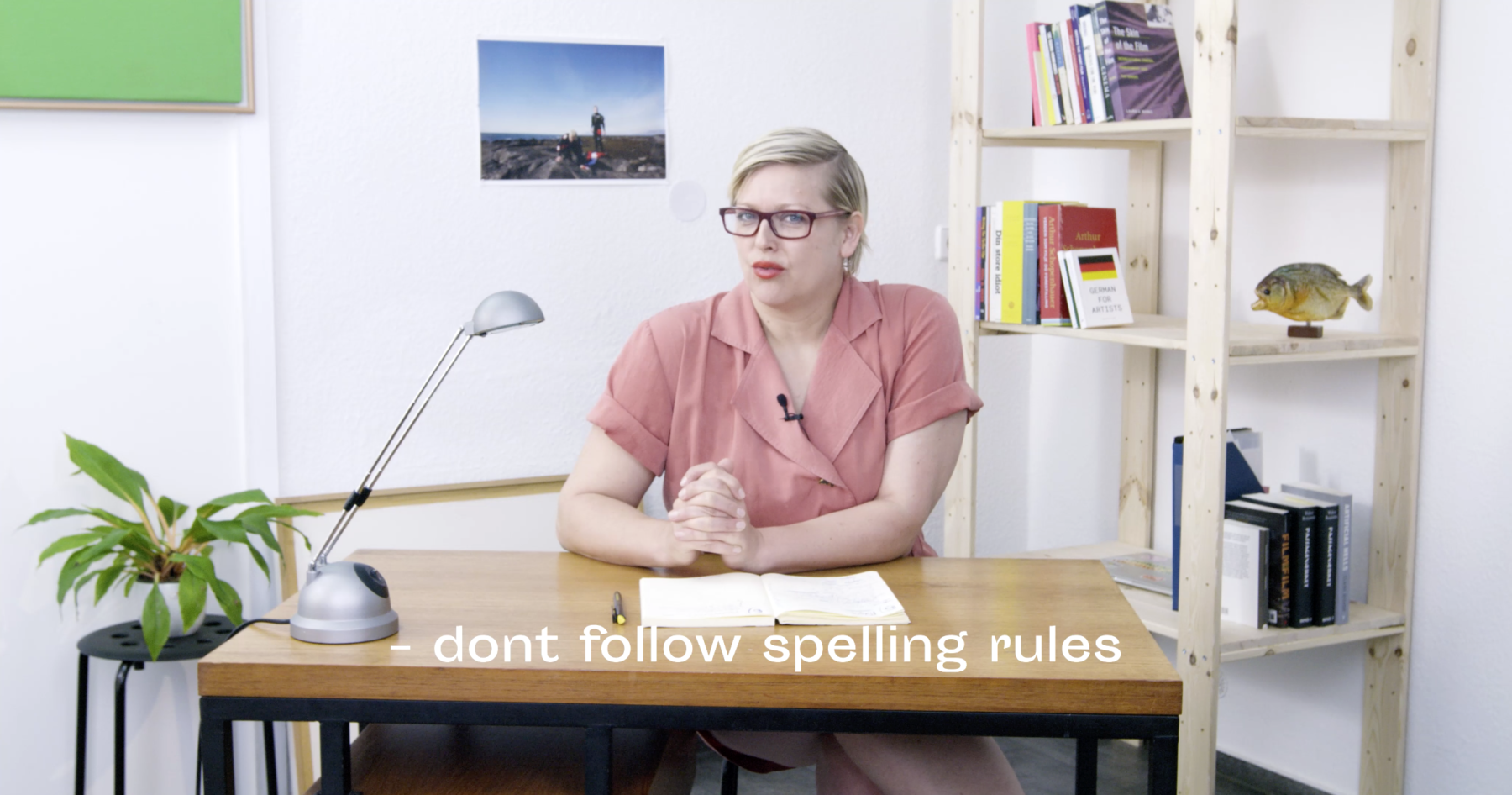 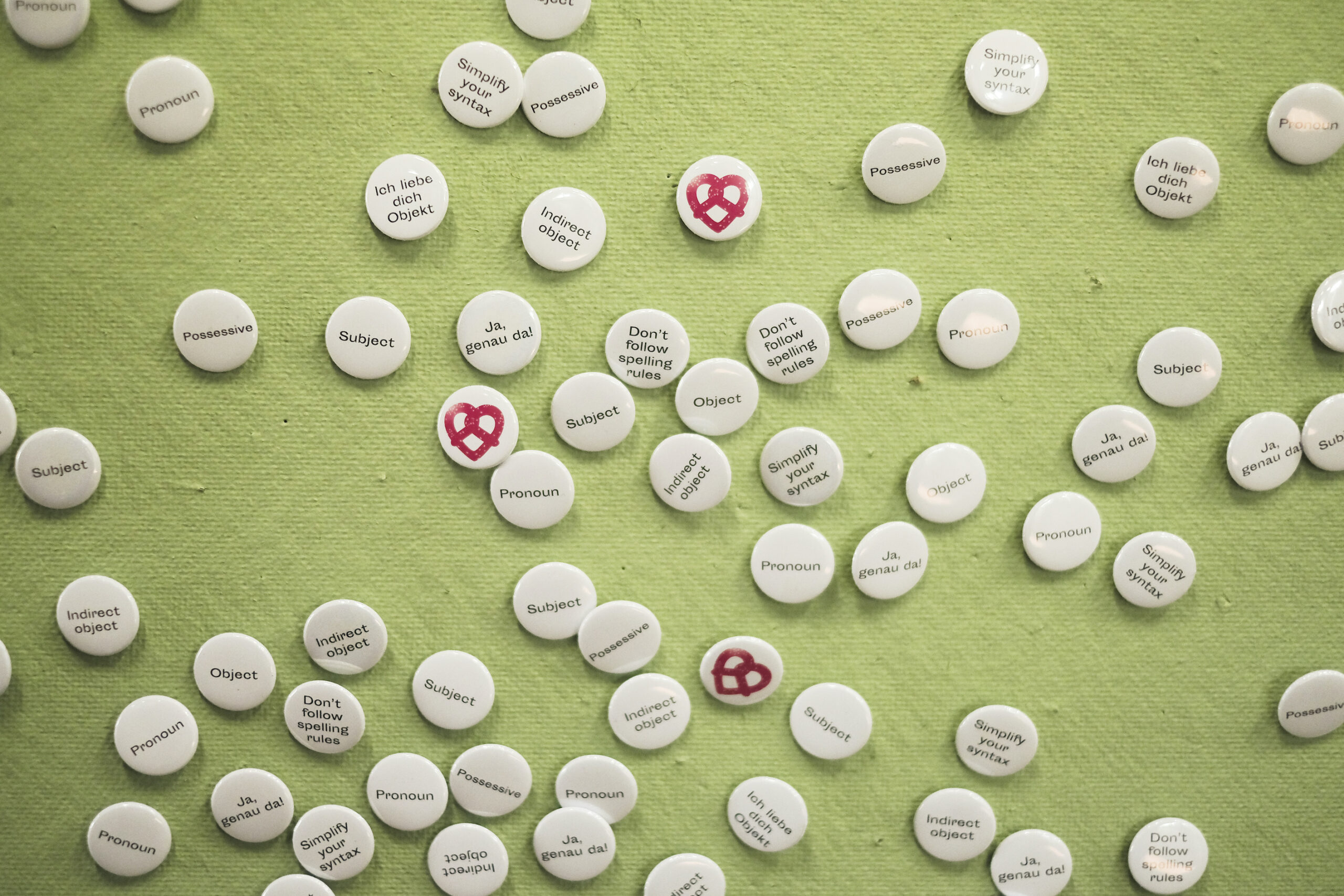 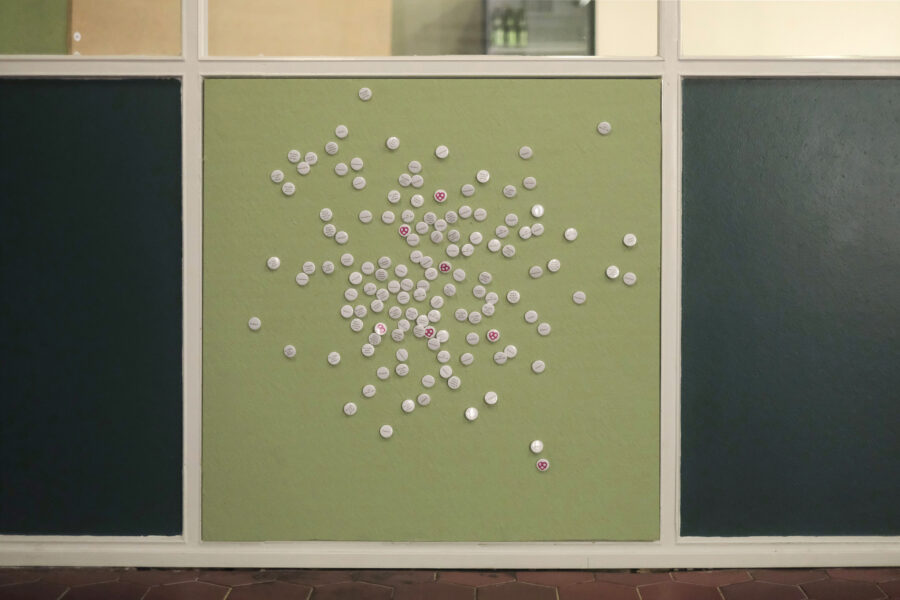 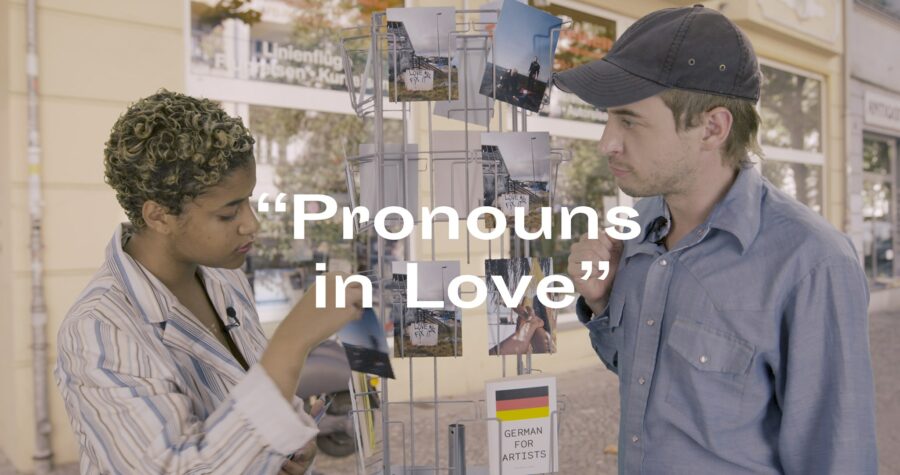 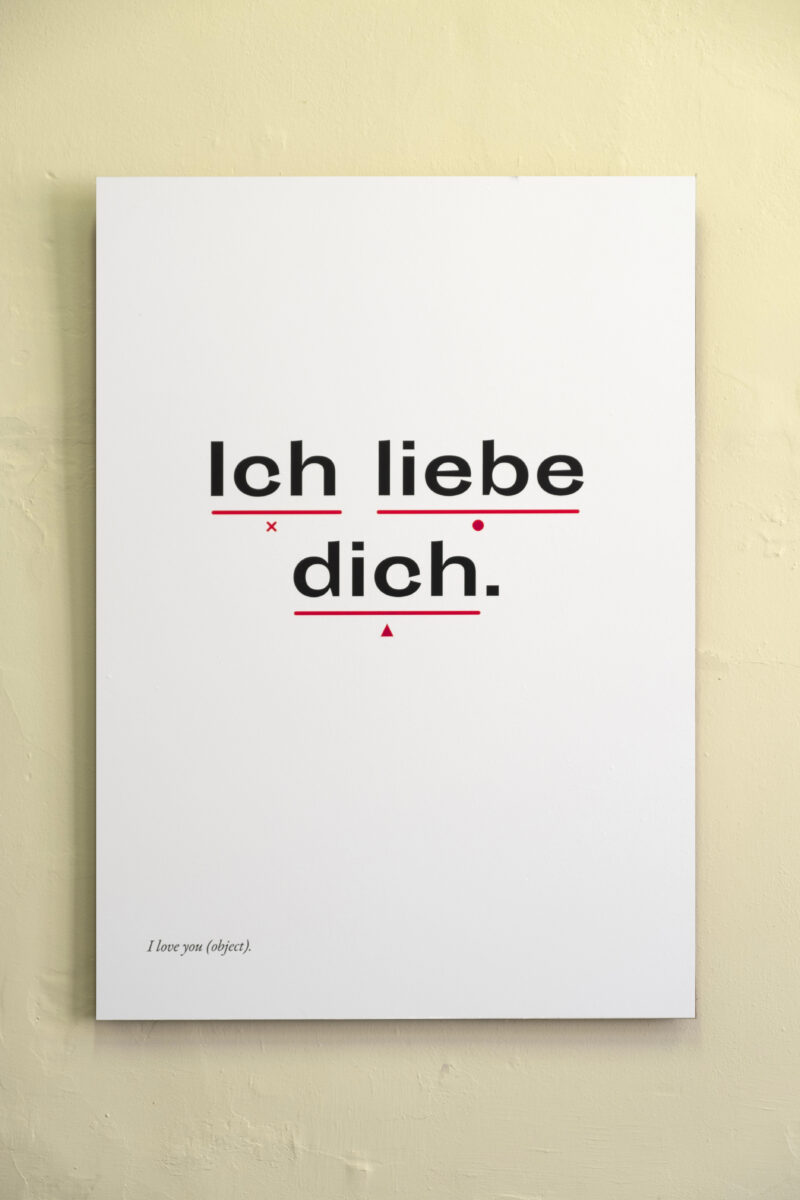 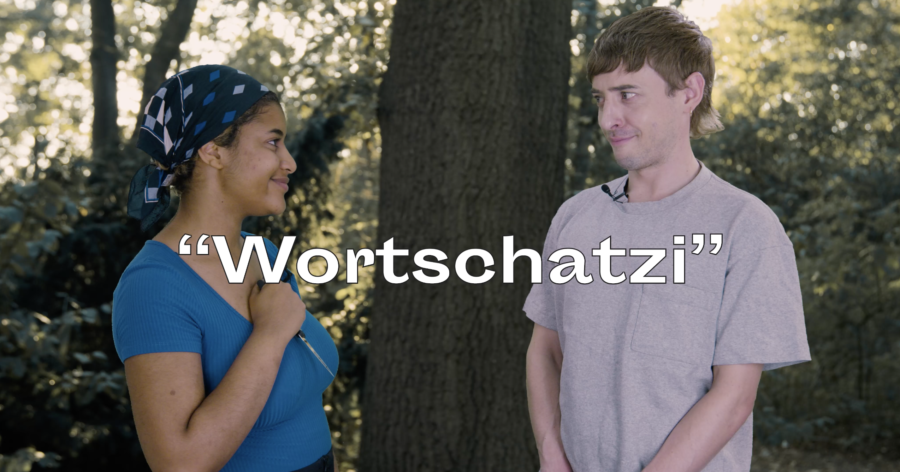 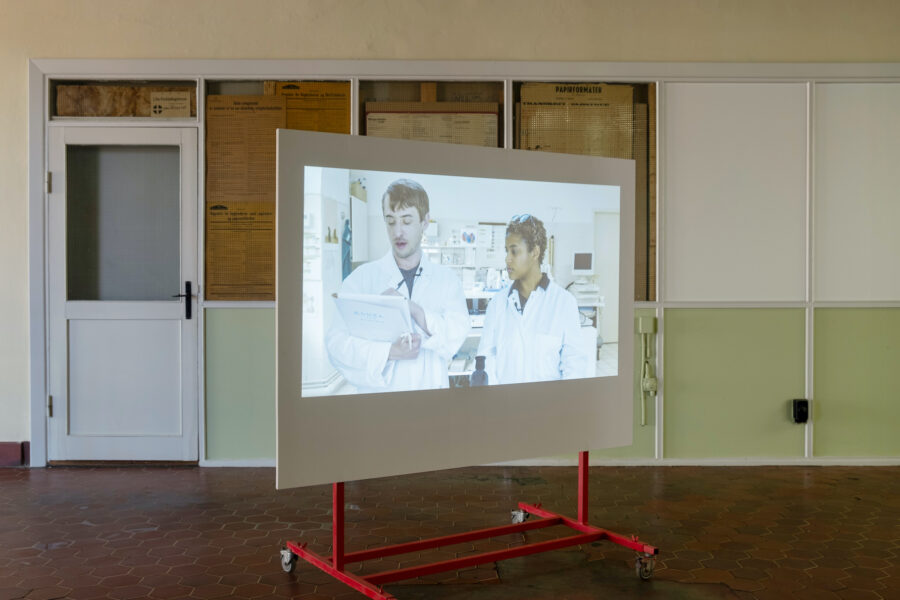 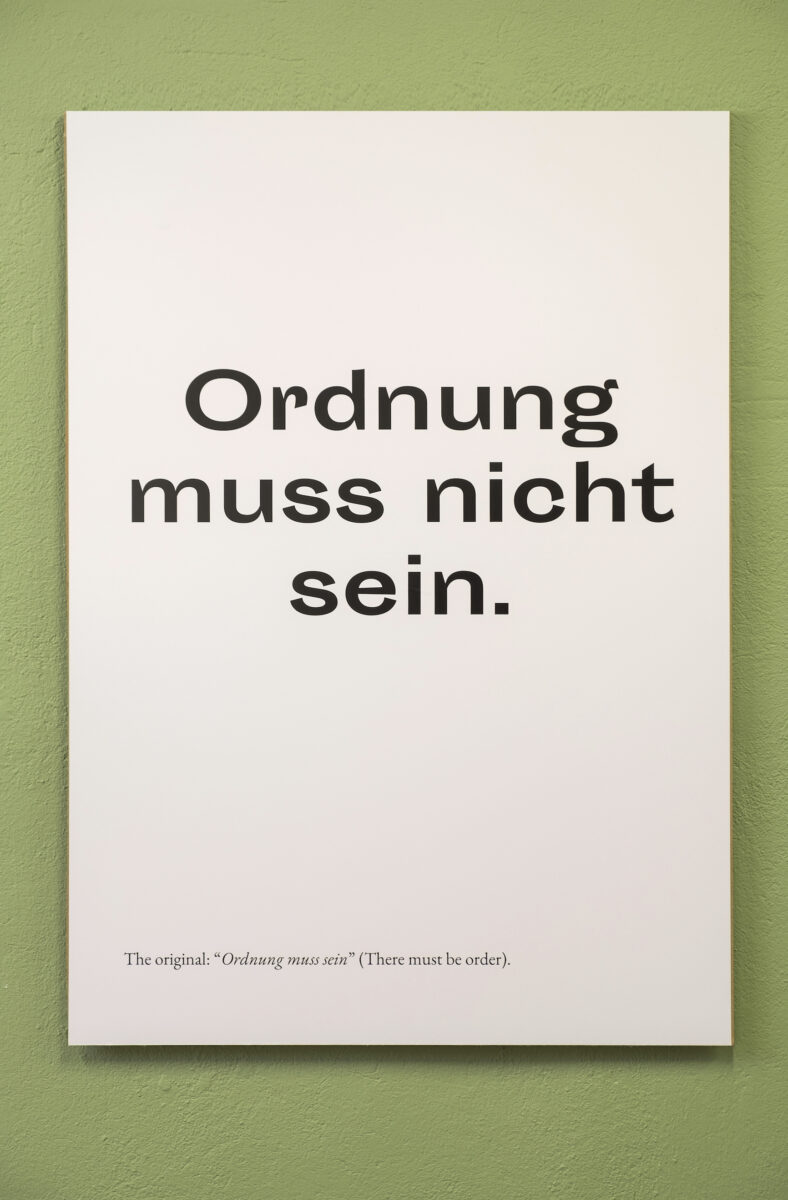 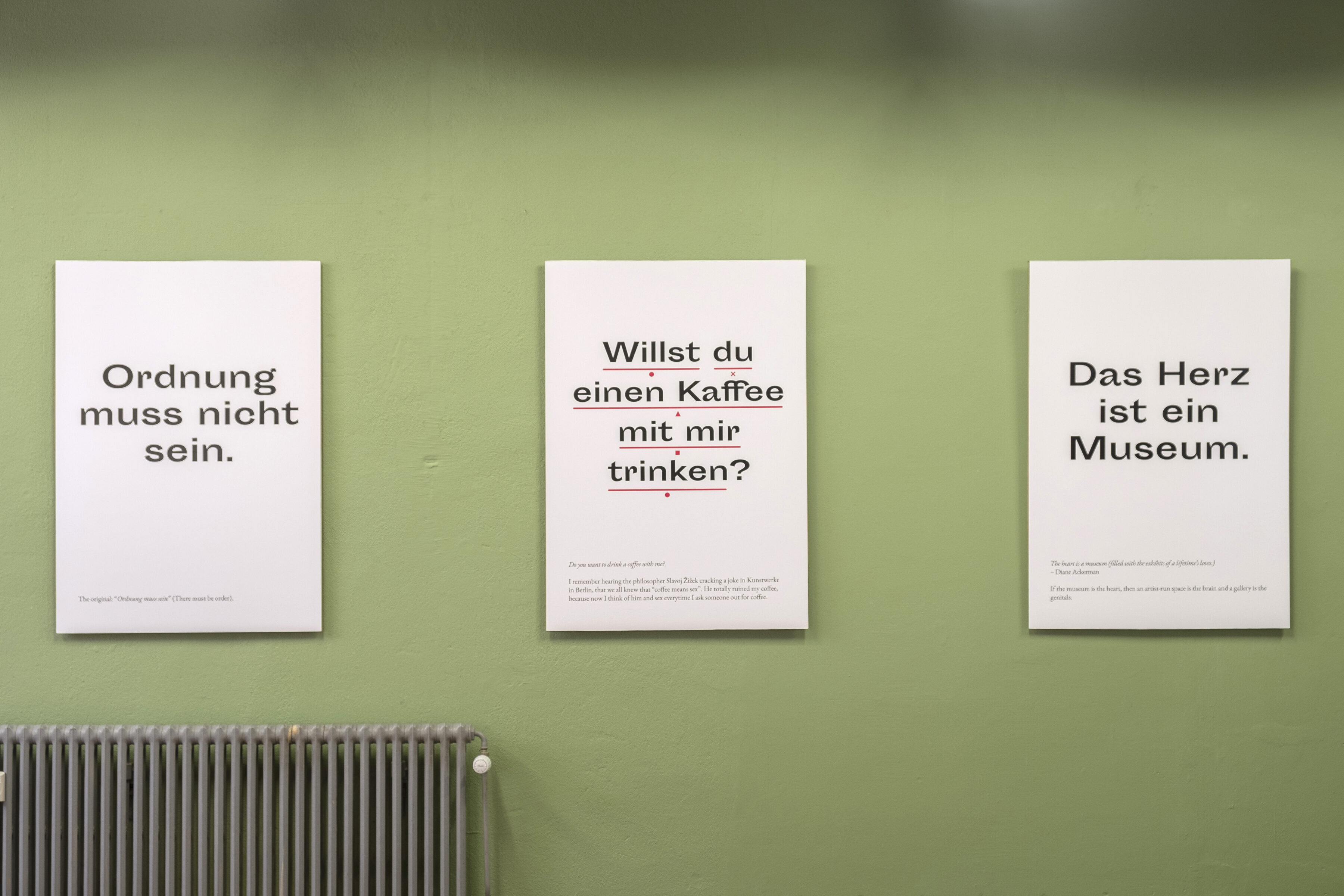